My mother always said to me that I’d “get what I paid for!” if I bought the cheaper version of something. Over the years she’s been right sometimes, and wrong other times … but in general, if something costs considerably less than another equivalent product, I’ve ended up vowing never to buy it again! Is it the same with house alarm systems? Today we take an expert view of the differences between cheaper house alarm systems (as well as other various methods of cost-cutting in home security), looking at why a penny saved on your house alarm system may not be a penny earned…
House alarm systems from hardware stores or online suppliers may not be wired to industry-best standards … and false alarms are often the result of cost cutting in the wiring department. Apart from annoying you when you’re home, false alarms on a monitored system will cost you extra cash, and could be the cause of understandable noise complaints from the neighbours. 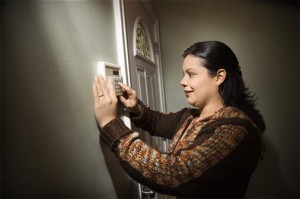 Poor quality systems don’t always hold up to even standard operations like changing the batteries. Plates crack, screws get stripped and terminals come loose. Sigh.
House alarm systems manufactured in Australia should comply with Australian Standards – which are far more stringent than the standards in countries like Hong Kong, Taiwan and Indonesia, where many of the cheaper house alarm systems are made. Of course, not every South-East Asian made product is poor quality – you should feel free to purchase one of the lower-end (but still recommended) systems from a licensed house alarm system installer. This means an expert has vetted the system, and if anything goes wrong you have someone in the same country as you that is accountable for it!
If you purchase and self-install a house alarm system, even if you have back to base alarm monitoring enabled for it, there’s quite a possibility that the system will simply fail to perform at break in time. If the sensors are prone to dusting over or the wiring is shoddy, you may get broken into and the thief may not even realise you have an alarm system. Unless you want to be making full checks of your home security system every single month to ensure
What is the decibel rating on the house alarm system you’re considering buying? The decibel scale follows a sigmoid curve – it is not a simple straight line relationship between the number of decibels and the actual ‘loudness’ of an alarm. A small drop in decibel rating can actually mean quite a large drop in loudness. Some customers describe their old self-installed alarm system sirens as comparable to a child playing a kazoo out the front … not quite the effect that they were hoping for!
The unexpected always happens. When it does, many cheaper house alarm systems come either with no manual, with a manual in a foreign language, or one which is incomplete and difficult to understand.
So in our experience, with house alarm systems, you certainly do get what you pay for. PST consultants are happy to try to work within your budget … just don’t let your budget be guided by the price of unreliable, cheap, tinny eBay-purchased house alarm systems!
See Clear View High Definition With 8MP Cameras